Let's talk a little bit about uneven fronts on maps. In general, FTA is countered on maps in AWBW by allowing each side to be a half turn ahead at the end of their turn - for example, if there are two bases, each side gets to go first on each base. Thus the infantry counter was born. However, this only holds if both fronts are even in worth. Using one of BamboozleIV's maps as an example, let's explore this a bit further. 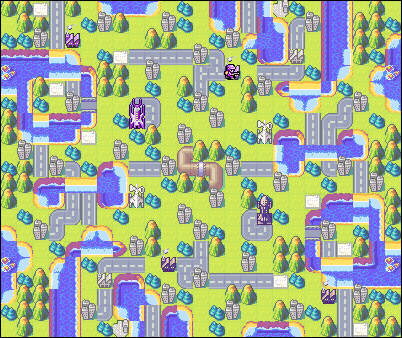 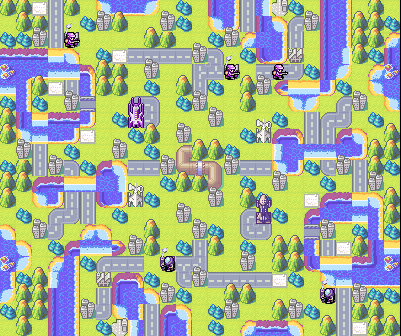 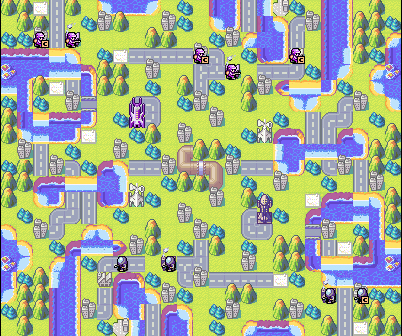 Note that there are many different ways for the capture phase to go. But I am picking a route for each country that maximizes the amount of total funding, rather than rushing for contested properties, etc. This is to demonstrate the full effect of the uneven fronts. 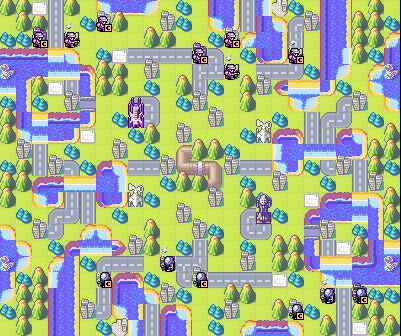 PL has 9k available on this turn, and therefore is able to afford the first vehicle. No problem there, as long as BH is able to counter with a vehicle of their own, which they do next turn. 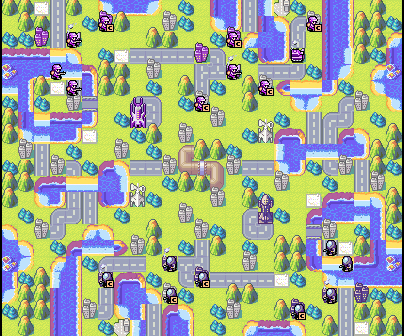 BH counters with a tank of their own. If the map is properly balanced, PL will not be able to afford a vehicle this turn, and BH will build the second tank next turn before PL's second vehicle. Thus the vehicle builds go P2-P1-P1-P2 and all is well.

However, PL has enough funds to afford an artillery, which they build. On some maps it is not a problem for this to happen, because buying the artillery will set the player back on tank count - and on many maps, the artillery cannot get into a useful position as quickly as a tank, so you lose out on contested properties. But on this map (as you will see), this does create a problem. 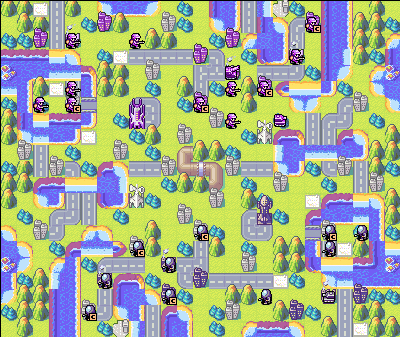 BH has enough funds for a second tank this turn, which they should build. However, PL is able to build their own second tank too. 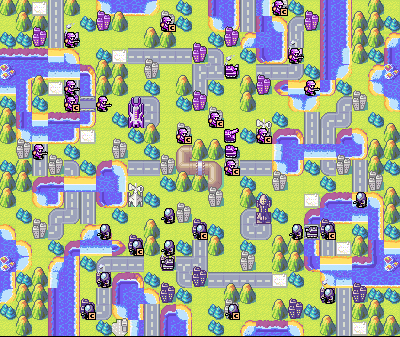 So with that, here is the situation on Day 7. BH and PL have the exact same funding and income, but PL has managed to build an extra artillery without having to sacrifice on tank count, positioning, or control of the contested areas of the map - in fact, they will be able to use their advantage to likely force BH away from contested properties, gaining a bigger advantage. I don't think there's any need to go further.

Recognizing that the map has the STA issues described above, Everdan made a comment to move the FTA counter infantry back from the starting base so that BH grabs the neutral base first. Let's walk through that situation and see how it turns out: 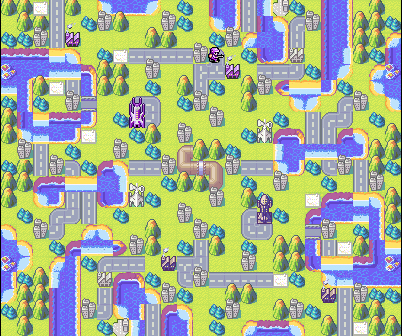 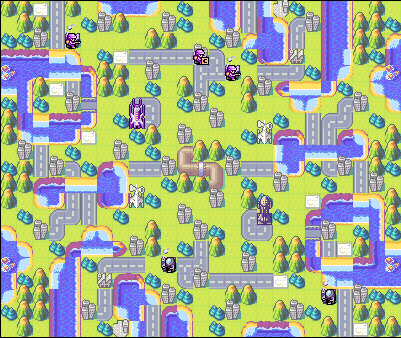 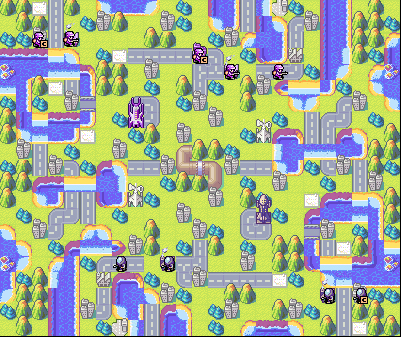 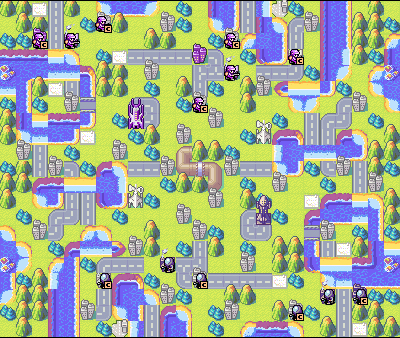 PL once again has the funds to build the first tank and should do so. 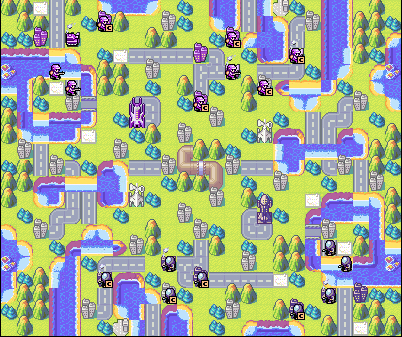 This turn, BH has the funds for a tank but PL can instantly counter with a second tank. In order to preserve capture efficiency, I built the tank on B1 - arguably it is better to build it on B2 to help control the center, but it seems like a tossup to me without exploring it in too much detail. 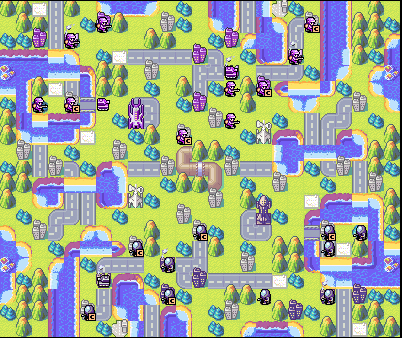 The pattern repeats, and it's clear the PL has a funding and vehicle advantage over BH. 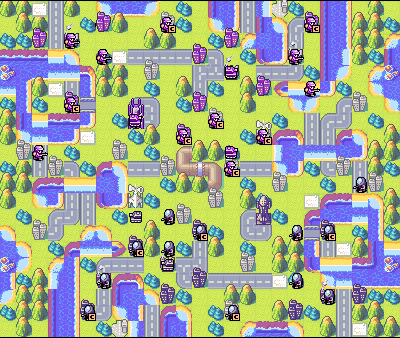 By this point, you can see that there is still significant STA with Everdan's recommended FTA counter. The problem here is that the fronts are still so uneven that any advantage from B2 will negate going second on the other two bases. More importantly, because funding is linked across all bases, the funding advantage from going first on B2 creates the opportunity for advantages on the other fronts, by being able to build vehicles first there (as shown on the Day 5 image above).

On some maps, Everdan's recommended FTA counter will actually create FTA, however. If the neutral base is positioned in a forward position (closer to the contested areas than B2), then allowing P1 to go first on the neutral base will allow them to gain a positioning advantage on both fronts. At first glance, I thought this would be the issue with Everdan's proposed counter on this map, but I didn't correctly predict how the fronts would develop. It's outside the scope of this post to go into more detail about FTA caused by Everdan's counter, however - if there's interest I can discuss this using a better example map.

In any case, the biggest problem on Nerevarine with regards to STA is the clump of properties near B2, which gives that base disproportional value to the player who moves first on it. With those properties spaced out a bit more, very minor STA could occur due to the tower and airport being captured by B2 (STA due to the airport is more common on maps where the airport is very forward and the first copter built allows a player to control a front). So usually to mitigate this, the airport is placed on the side opposite the neutral base. That doesn't seem to be a major issue on Nerevarine, however.

Re: Uneven Fronts and FTA Counters

Whoa this was really informative, I generally don't tend to actively think about how the fronts will develop so this will really help me work on that. Thanks Walker

I've made the following changes: 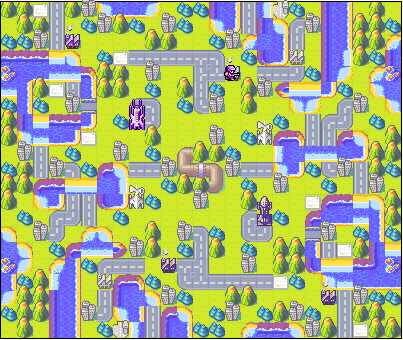 Again this helps a ton, thanks for making this.